Since the time of its creation humanity has faced and survived countless of calamities. Crisis is in fact a very essential part of human life. Whenever such conditions take place it falls on the shoulders of men themselves to approach the conditions responsibly and competently. The new challenge, namely COVID-19, faced by human kind has been a hard experience. From effecting countless of people without any discrimination to the resultant lockdowns. It was not a surprise that the low socioeconomic community of Pakistan was going to suffer. Something had to be done. Realizing its responsibilities FMH School of Medicine and Dentistry came forward and schemed an elaborate plan to distribute ration packages among the effected population of lockdown. The program was initiated by Mrs. Shahima Rehman, Prof. Dr Rakhshanda Rehman, Dr. Abid Aher and Prof. Dr. Saba Khalid. Furthermore Prof. Saba Khalid was requested to supervise the working team. Under her guidance a team from student body worked tirelessly to make this possible. From the student body Team Humans of FMH headed by Hafiz Abdullah and other students which included Armaghan Arif, Ahmed Abdullah Warraich, Nimra Ayyaz, Haris Idrees and Mishaim Khan participated and made this drive possible. Whereas Team humans of FMH consisted of Muzammil ghaffir, Ahmed Nadeem, Iftikhar Ahmed, Ali Asif,  Muhammad Ahmad, Afraz Naeem, Asad Hussnain and Azeezullah were a part of this drive. Generous contributions were made by the faculty and rest of the funds were collected by students. Alhamdulillah hundreds of houses were catered and following are the details of the cities entertained along with the number of the houses covered. 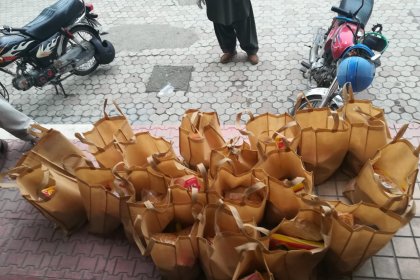